This website uses cookies to improve your experience. We'll assume you're ok with this, but you can opt-out if you wish.

The following conversation took place in the run-up to our annual summer camping trip recently.

Rachel has no interest in camping, so this ritual is all mine. I started the little ones young with a one-night trip within an hour from home so that we could come home if it’s a total disaster. As they have aged and we have developed our routines, we have gone further afield, exploring wide-ranging Minnesota state parks for two-night stays. We added a weekend fall trip, too.

Last summer, the kids began to ask why “we only go for two nights”.

Ladies and gentlemen, when the kids ask that question, you know you’re doing it right.

So this summer we are expanding to three nights. Tabitha was thinking about that change the other day.

I am straightening some things on the front porch, sweeping and tidying. Not thinking about anything in particular.

Tabitha (7 years old): If we’re going for three nights, is that 2 days and 2 half-days?

I realize that I have an opportunity here.

Me: How did you think about that?

T: Every night is a day, except the last one, when we go home.

Me: You mean 400 nights of camping? You know how many days that would be?

Later, she is in the shower. I am not-so-closely supervising nearby. I get an idea.

Me: Tabitha, what if we wanted seven days of camping?

T: How many nights?

T: Ask me another!

Again, a sign that things are going well. Contrast with her claim a couple years back, “Sometimes I don’t want to tell you about numbers because it’s just going to turn into a big Daddy math talk!”

I have to think hard to dig up something that will be more challenging for her.

Me: You want a hard one? A really hard one?

Me: Last year, we went camping twice. Altogether, we camped 4 nights. How many days did we have?

It turns out that Griffin is lingering in hallway outside the bathroom. He chimes in.

Me: Two days, and four half-days.

Me: But she’s thinking about it as four half-days, since they aren’t attached to each other. I can see an argument either way.

This summer’s trip was to Lake of the Woods in the far northern reaches of Minnesota. 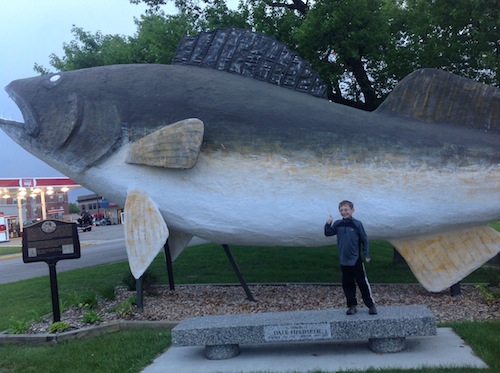 So what do we learn?

It may surprise some readers that I have filed this conversation under Algebra.

Like many of the other algebra posts, we are not using x or y, or making graphs or solving for variables. Instead we are thinking about a relationship, and about what that relationship looks like for a wide variety of numbers.

The relationship we are working with here is a simple one: one less. Tabitha had noticed that the number of full days we camp is one less than the number of nights we camp. She had even generalized the idea—notice that she didn’t count the days individually. She said, “Every night is a day, except the last one.” This answer doesn’t depend on any particular number of days; it works for all numbers of days.

What I did in this conversation was help her to apply this idea. By asking her about a wide range of numbers of days, she got to feel the power of her generalization. That is algebra.

The other important part here was continuing the conversation while she showered. Thinking in reverse is an important mathematical skill. We had started with how many days do we get with a certain number of nights? I moved us to how many nights do we need for a certain number of days? The fancy math word for the relationship between these two questions is inverse.

Camping trips, vacations, trips to grandma’s house…these are all opportunities to have the conversation we had. If your child doesn’t ask about it, you can ask your child. We are going to grandma’s house for three nights—how many days will you have to play with your cousins while we’re there?

More generally, there are two Talking Math with Your Kids moves I want to emphasize.

Follow Talking Math With Your Kids on WordPress.com
← Previous Next →